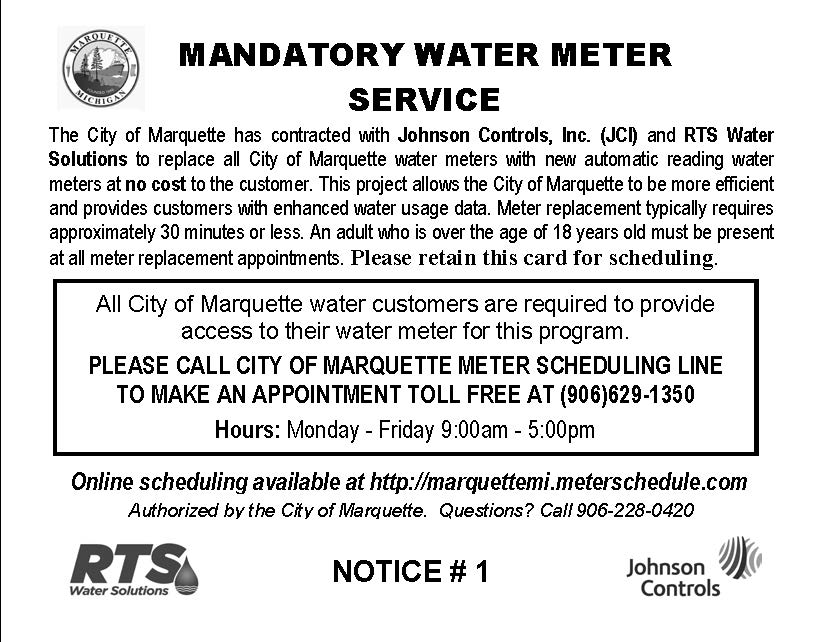 Residents of the City of Marquette will be receiving this postcard in the mail regarding a Mandatory Water Meter Service.

The City has been divided into zones. The first zone will be receiving their postcard the first week of May, 2018. The next zone is expected to be mailed in June and so forth. Residents are required to make an appointment by calling (906) 629-1350 or online at marquettemi.meterschedule.com with the pin number they receive on the postcard.

RTS Water Solutions is the contractor completing this project. They can be identified by an RTS marked vehicle, wearing an RTS shirt or vest and in possession of a photo id. An adult who is over the age of 18 years old must be present at all meter replacement appointments. Please put animals away during installation for the safety of the contractor.

Advanced Metering Infrastructure, which the Federal Energy Regulatory Commission defines as “A metering system that records customer consumption hourly or more frequently and that provides for daily or more frequent transmittal of measurements over a communication network to a central collection point.”

How does an AMI system work?

No personal customer data is ever stored on the endpoint, and the data itself is encrypted. Once every four hours, the endpoint transmits stored, encrypted hourly data from each water meter to a data collection device known as a router. In Marquette, there will be nine routers installed on utility poles across the city. From there, the router transmits the data via a cellular modem to a secure server that is hosted by the AMI system provider.

Authorized City of Marquette utility staff members can then access the data for billing purposes, to determine which meters and endpoints may require maintenance, and to provide you, the customer, with greatly enhanced customer service.

How secure is the AMI system data?

Will the City of Marquette be able to monitor my activities through the new AMI system?

The new AMI system for the water utility reads the water meter only once an hour. One cannot determine with any degree of accuracy when or if someone was home, what they were doing or which water consuming devices were in use during that period based upon having only one reading per hour.

Yes, AMI systems are safe and pose no danger to public health. Water endpoints that transmit at both the same frequency (902-928 MHz) and transmission power output (up to 1 Watt) like those being installed in Marquette have been in service for over thirty years, and AMI systems for water utilities have been in service since 1994. There are no known health effects associated with AMI systems.

Human exposure to electromagnetic (radio frequency) waves is measured in terms of Power Density, which is the electromagnetic wave energy in milliWatts (mW) in a transmission over a defined area [cm2]. The Federal Communications Commission (FCC) limits exposure to radio frequency transmissions. This is known as the Maximum Permissible Exposure (MPE) for the General Public.

The Maximum Permissible Exposure limit assumes that a person is 20 cm (7.87 inches) away from the endpoint. It is important to understand that the available energy from a radio frequency transmission weakens with the square of the distance traveled away from the transmitter (endpoint), and only very rarely should a person be within 8 inches of an endpoint since the endpoints will be mounted on an outside wall.

The Maximum Permissible Exposure limit also averages the amount of time that the endpoint is actually transmitting over a thirty minute period (Duty Cycle).  The Duty Cycle is far less than 1% for AMI systems.  On average, the Duty Cycle for the AMI system in Marquette is 0.06%, or less than one minute per day.

The Michigan Public Services Commission in its U-17000 Report to the Commission from June 29, 2012, states that:

“After careful review of the available literature and studies, the Staff has determined that the health risk from the installation and operation of metering systems using radio transmitters is insignificant.  In addition, the appropriate federal health and safety regulations provide assurance that smart meters represent a safe technology.” (p. 2). 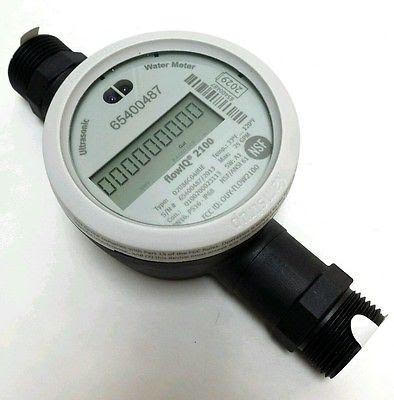