Well, it’s midwinter and we have successfully completed all of the annual outdoor events that I talked about in the last newsletter. I need to go light on the “we” because I have had very little to do with that success, but in a small way we’re all involved somehow. I want to take this opportunity to congratulate and thank all of those who ARE in the thick of it and have worked very hard over the years to make our community a positive place to be. Especially in the winter.
This time of year for the City is filled with planning and preparing for the summer. Which to us is also best described as “the short construction season”. We try to schedule these projects through a five-year plan, but on occasion things happen to either change or add to that plan. Two such changes happened last year. The first was the result of a serious storm last October that caused considerable shoreline damage and the second was the long-awaited acquisition of the old Lighthouse property from the U.S. Coast Guard.
A large portion of the shoreline that was damaged during the storm occurred at Shiras Park (Picnic Rocks) where much of the shoreline and a large part of the parking area were impacted. As a result, the park was closed to the public. By shifting some of our financial resources around we hope to have a short-term fix in place so that the park can be re-opened for this summer. Because some of the fixes that we have in mind (both long and short-term) will reconfigure the parking area and entrance, the park will look somewhat different when re-opened. We will also begin the planning for a permanent, long-term fix. 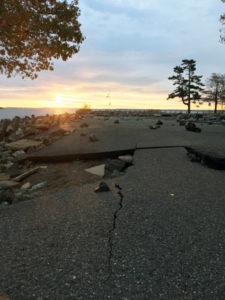 You can also look forward to some improvements at the new Lighthouse Park. The City Commission recently accepted a long-term development plan for the park that outlines the proposed improvements. Also by shifting some of our financial resources we are happy to say that we will begin some of those improvements this summer as well. At the very least we hope to relocate the multiuse path, refurbish the Captain’s house for use as a short-term rental, possibly refurbish the old station house and generally clean-up the property. If time and money allows we will also look at improving the entrance to the park via East Arch Street.
Overall, we’re looking forward to another busy “short construction season” and we hope that you are here with us.